02/07/2020 | A total of 16 pressurised heat accumulators, each weighing 90 tonnes, were transported from Rain am Lech to Cottbus for the conversion of a combined heat and power plant from lignite to gas operation. The specialists from the heavy haulage company Bau-Trans spent around a year planning the project down to the last millimetre.

Even under the most difficult conditions, the heavy load specialists from Bau-Trans were able to control the heavy transport with its 65 metre length and 6 metre width. Some sections even had to be negotiated in reverse, as they would not otherwise have been passable due to the bends. The Corona crisis was also a challenge. The safety measures that had to be observed resulted in an unavoidable delay for the transport. However, the order for the special transport has now been successfully completed and construction work on the factory site is in full swing.

Sixteen pressurised heat accumulators were transported for the Cottbus municipal co-generation power station in Lusatia. The plant is to be converted from pulverised lignite combustion to gas operation. The transport distances of around 550 kilometres led from the manufacturer "Krämer Industriebehälter" in Rain am Lech to the power station in Cottbus. "In summary, the journeys went well - pretty much as we had imagined", says Markus Meusburger, head of the transport department, satisfied.

The loading was carried out with a Liebherr LTM 1350-6.1 mobile crane from the crane fleet of the Felbermayr subsidiary Wimmer Maschinentransporte. The containers were unloaded by the specialists from the Bautzen branch of Felbermayr Transport- und Hebetechnik.

Approximately 300 megawatt hours of heat can be temporarily stored in the supplied pressurised heat accumulators and the one expansion tank. This makes the generation of electrical power more flexible. The new gas-fired power station can adjust its own output according to requirements. Municipal utility providers also say that the controllability of power plants is of great importance for success in the electrical energy market. After completion, the plant will emit about 30 percent less carbon dioxide. The new power plant will therefore operate much more efficiently and will be completed by mid 2021. 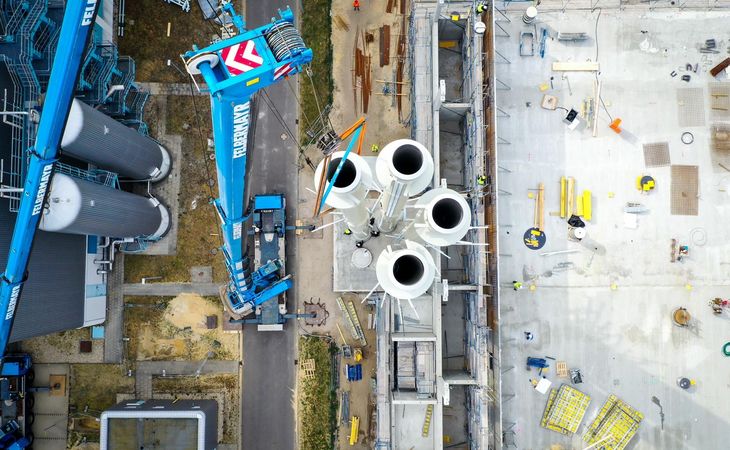 The new gas-fired power station will be completed by mid 2021. 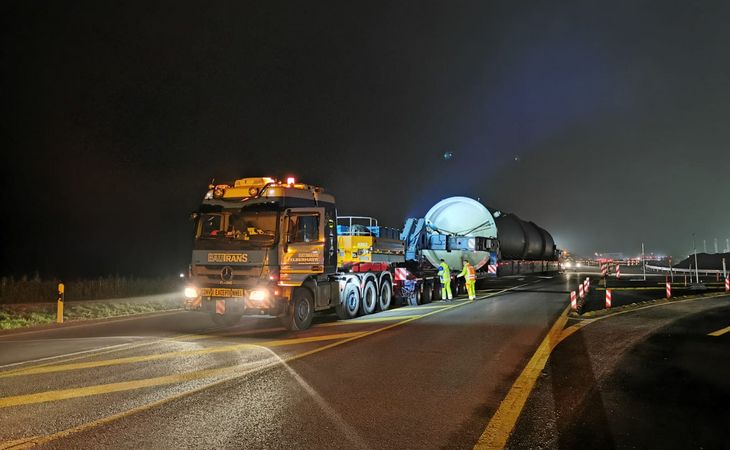 The heavy load specialists from Bau-Trans transported the pressurised heat accumulators from the industrial tank manufacturer to the Cottbus co-generation plant.
Previous Next