28/04/2021 | In mid-April, Bau-Trans transported two heat storage tanks from an industrial container manufacturer in Bavaria to a power station in Zurich. The task required the simultaneous use of two support frame bridges. Wimmer Maschinentransporte GmbH provided a 350 tonne mobile crane for loading the heavy lift cargo onto the transporter.

“The challenge of this special transport lay in planning the route”, reports transport manager Markus Meusburger. Employees at the transport and lifting technology company in Lauterach spent six months meticulously planning the most efficient transport route. At the start of April - once the preparations were complete - the lifting technology specialists at Wimmer Maschinentransporte arrived on the site of the industrial container manufacturer to begin loading the heat storage tanks onto the two transporters with the help of a 350 tonne mobile crane. The cargo was then sufficiently secured for heavy haulage. Coming in at a length of 65 metres, a width of five metres and an overall weight of around 220 tonnes, the heat storage tanks set off on their cross-border journey from Rain am Lech in Bavaria. The experienced colleagues in the Bau-Trans projects department also decided to deploy two support frame bridges. Passing obstacles such as roundabouts and crash barriers is made possible and more straightforward with this heavy transport equipment, because the cargo can be lifted and guided over the obstruction.

The heavy transport team spent six months planning the route because the distance from Rain am Lech via Nuremberg and Frankfurt am Main was roughly 850 kilometres, although the direct route from the starting point to the unloading site in Zurich would have actually been just 350 kilometres - whereby it was necessary to bypass bridges, exit motorway sections, and dismantle road signs and sets of traffic lights. “We had to ask a structural engineer to check several bridges. And we even had to bypass two of them because crossing would not have been possible due to massive weight of the transporters - despite precise calculations. These diversions have a significant effect on the length of the route”, explains Meusburger. Bypassing the motorway bridge on the A3 in Erlangen was simply preparation for the next challenge. To pass through the city with the daunting dimensions of the special transporters, it was actually necessary to travel roughly one kilometre in reverse. This meant it was possible to avoid dismantling sets of traffic lights and crash barriers. The manoeuvre through the city was followed by a few kilometres of motorway, which allowed the transport to make up time. However, the convoy had to leave the motorway once again at Lörrach, in order to bypass another bridge that was inaccessible to the transport with its total weight of 220 tonnes.

The vehicle technology of the support frame bridge was a great help in ensuring successful and speedy delivery of the transport. Thanks to the lower transport height, it was possible to cover part of the route through Switzerland on the motorway, which accelerated the process significantly and had almost no impact on traffic and infrastructure. However, the access road in Zurich proved to be a final challenge; it was necessary to dismantle some sets of traffic lights, and remove numerous road signs, concrete posts, lane dividers and traffic signs along the last section of the route.

After five nights in transit, the entire convoy finally reached the Hagenholz waste-to-energy plant and the heat storage tanks could be lifted into place. Installation of the storage tanks was finalised in mid-April, in order to absorb the power peaks and conserve fossil fuel. The energy generated is now no longer continuously distributed in the Zurich area, but can be stored in the heat storage tanks during periods of low thermal loads. 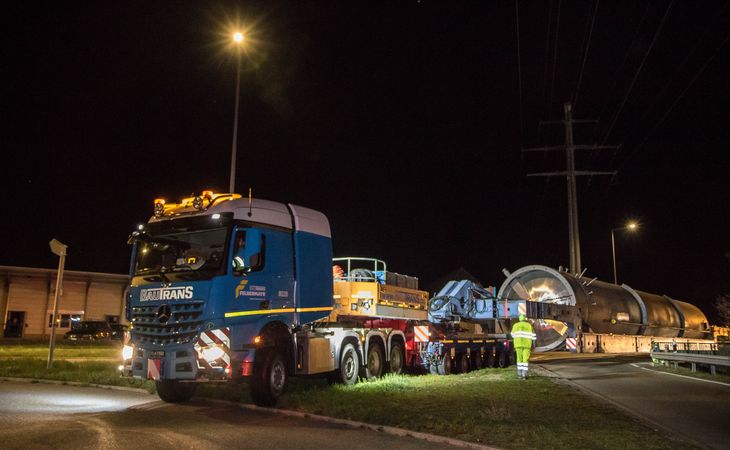 The heat storage tanks - each weighing in at 80 tonnes - were transported from Bavaria all the way to Zurich. 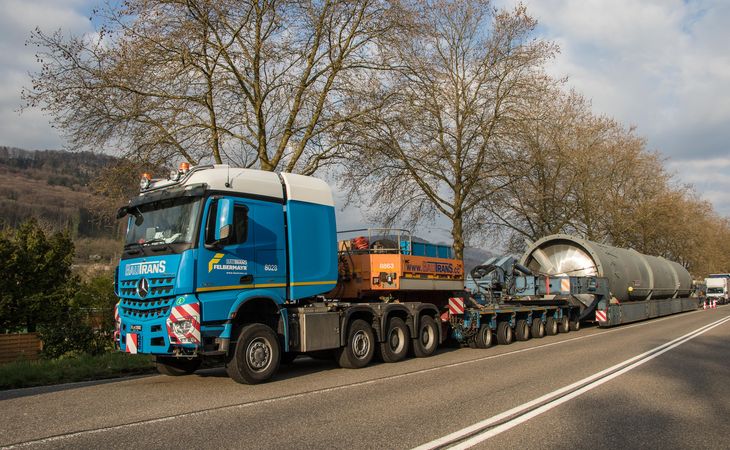 Support frame bridges were used for the heavy transport. 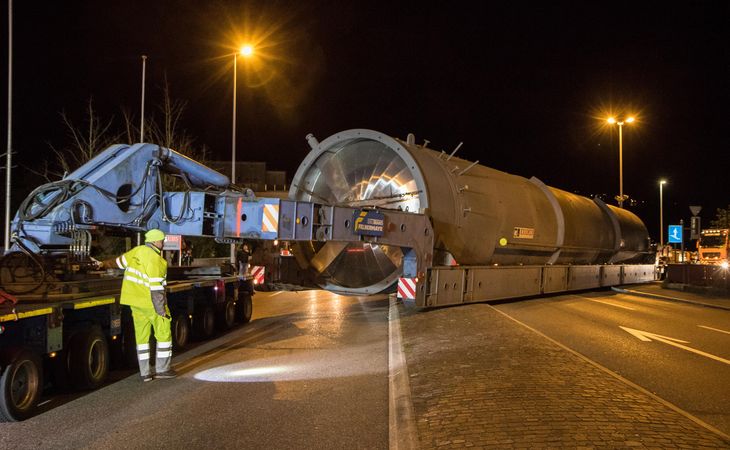 Use of support frame bridges facilitates the execution of heavy transports, because the load can be lifted with this special equipment and guided over obstacles. 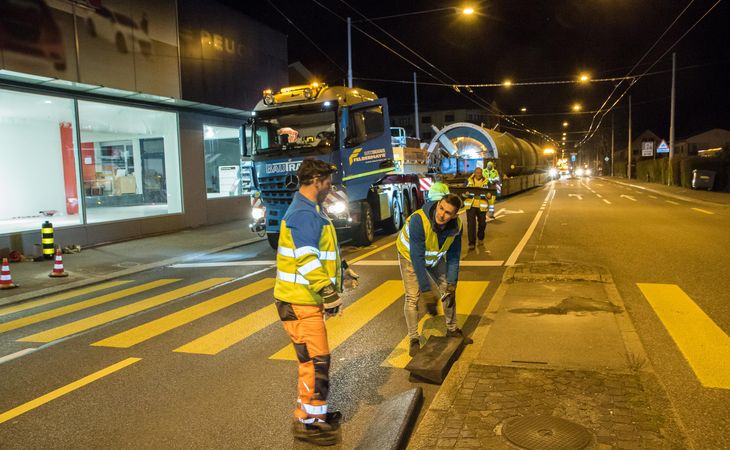 Dismantling some traffic lights, road signs or lane dividers was unavoidable on some sections of the route. 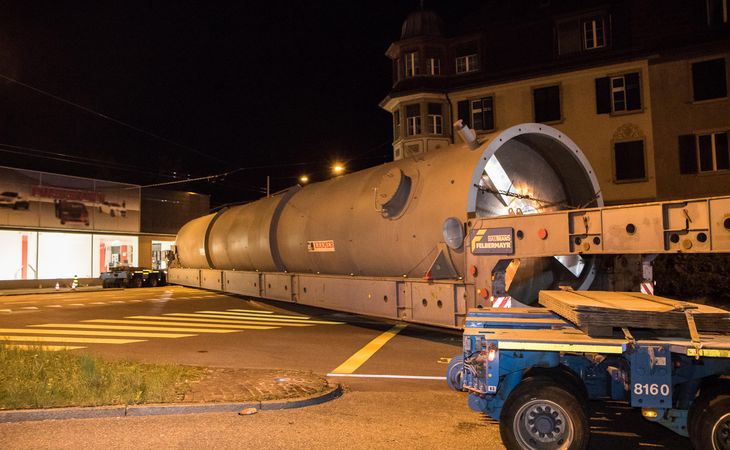 For one kilometre, the drivers had to steer the heavy transports through the streets in reverse. 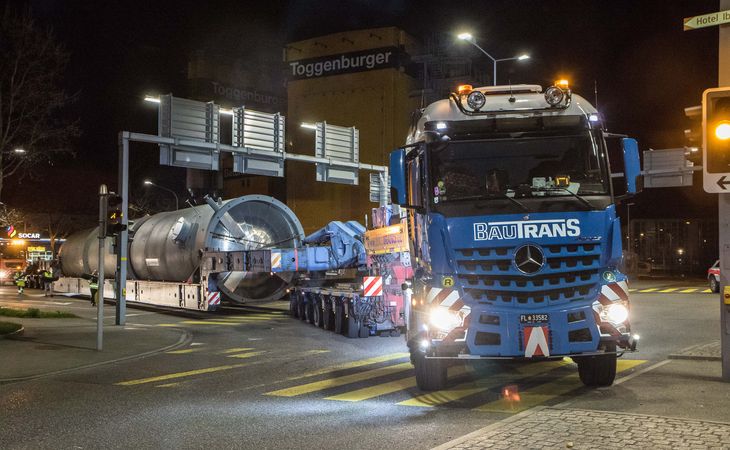 The drivers and the escorts of the heavy transport had to work with utmost care and precision to ensure successful completion. 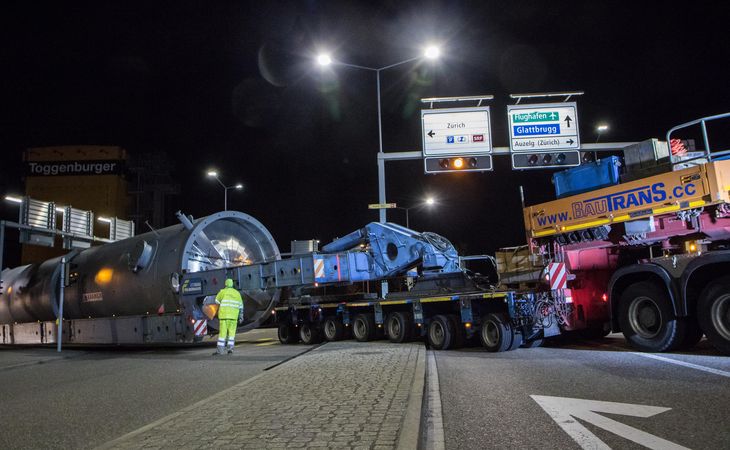 In order to avoid leaving damage in their wake, some traffic lights had to be dismantled towards the end. 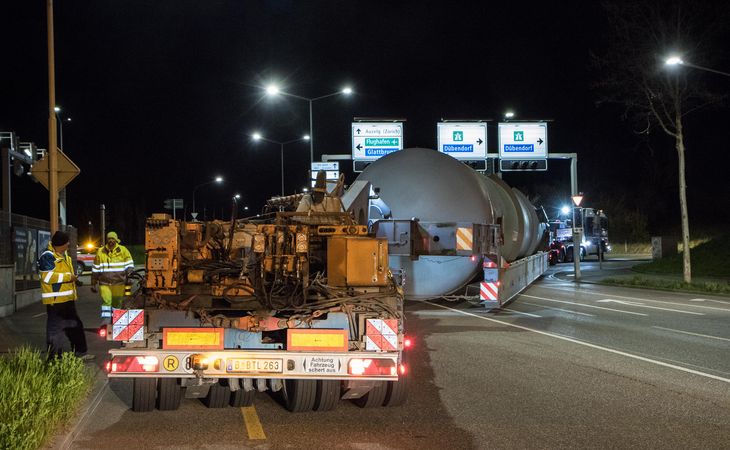 The tanks arrived at the waste-to-energy plant as planned after five nights in transit and a distance of around 850 kilometres.
Previous Next