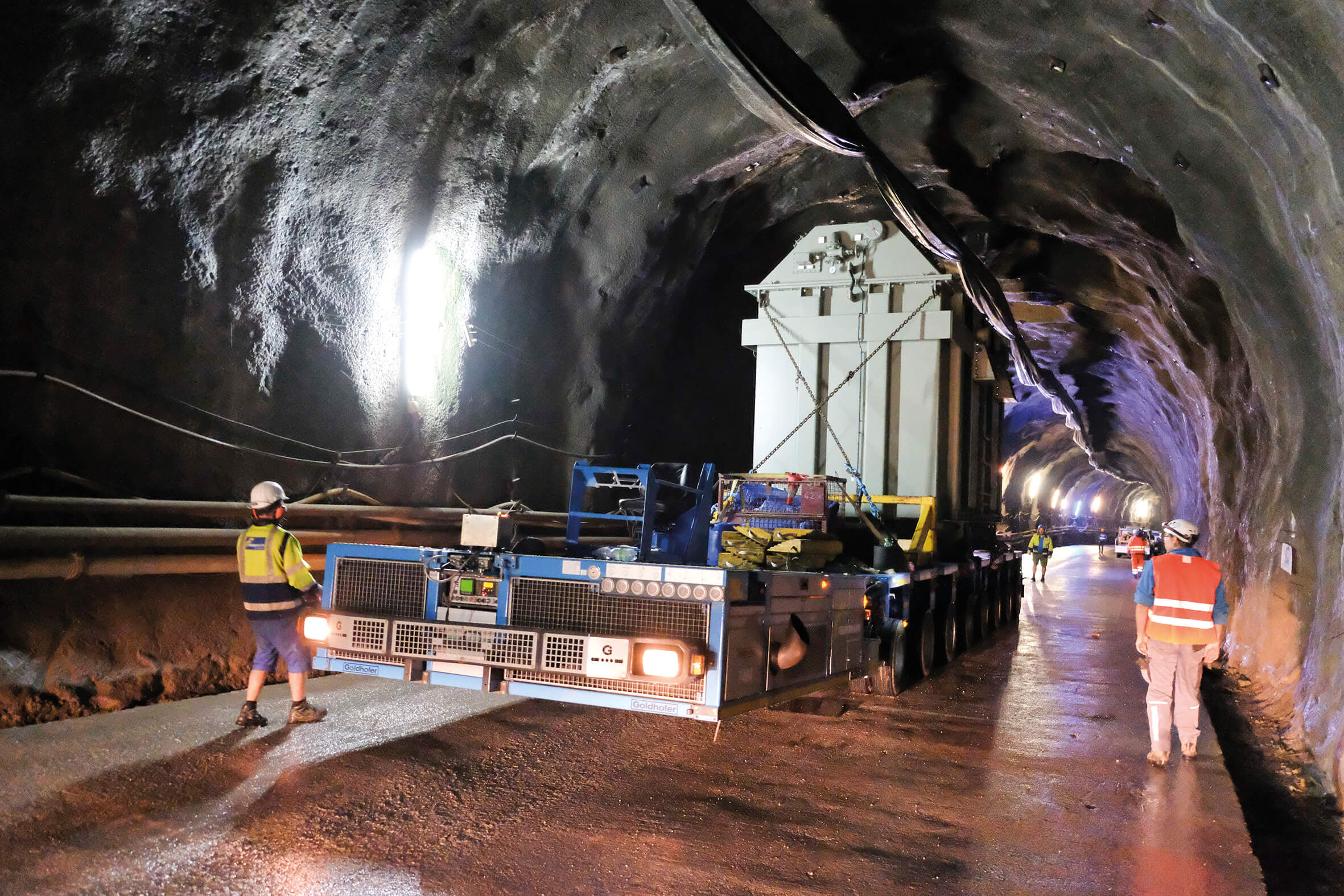 06/12/2017 | Last summer, Bau-Trans processed a total of thirteen heavy transports with unit weights of up to 152 tonnes for the Obervermunt II storage power plant project in Vorarlberg. Self-propelled transporter modules called PSTs served as the essential means of transport.

“The project had a lead time of two years,” says project manager Josef Ammann from the Felbermayr subsidiary Bau-Trans. He has a clear answer to the question why it took so long: “Due to age-related defects, we had to structurally re-calculate more than 60 bridges in order to obtain the necessary approvals.” And that is inevitably connected with a lot of effort and therefore also time and money. This primarily affected bridge structures on the Austrian side. Switzerland, for instance, has designated heavy-duty routes that make planning much easier. Ammann points out, however, that it is becoming increasingly difficult to find suitable routes in Austria and Germany.

The thirteen heavy haulage components originated in Austria, Switzerland and Italy. The energy provider’s premises, about ten kilometres south-east of Bludenz, served as a transshipment point and for the final assembly of some components. The three transformers, two of which weighed 152 tonnes and one 77.5 tonnes were produced in an Upper-Austrian transformer factory. The heavier voltage transformers were delivered by rail to the Montafon region. The lighter of the two could be delivered by road due to its lower weight.

The four butterfly valves weighing in at between 120 to 145 tonnes each originated in Germany, Switzerland and Italy. Due to the inadequate load-bearing capacity of many bridges, these oversized ‘water taps’ with a length and width of about five meters and a height of about four meters were delivered in disassembled condition. Final assembly was taken care of at the receiver.

The generator’s four stator parts originated in Switzerland. A trailer bridge was used to accomplish this feat. “We can use it to lift the load to for instance negotiate tight corner radii when running into roundabouts or barriers,” Ammann illustrates this special vehicle’s benefits. The two lower stator parts are 9.5 meters long, 3.9 meters wide and 4.1 meters high and weigh 128 tonnes. The two upper parts of the stator weigh in at 114 tonnes and, eight meters long and 4.1 meters wide as well as high. “Due to the excessive weights involved, some bridges had to be crossed using crab steering,” says Ammann, explaining that the front and rear axles, which are separated by the contact surface, are offset and roll along the left and right lane, respectively. Like that, the load is distributed over the two lanes of the road, which means that more weight can be transported. The central rotor body delivered from Italy could not be delivered directly to the Montafon region due to some bridges’ insufficient load-bearing capacity. Instead, the route had to reach the component’s destination via a large detour. This meant the heavy haulage transport had to take a detour of about 600 kilometres.

Things really got down to business on the last thirteen kilometres on the Silvretta-Hochalpenstraße. “We had to cope with gradients of twelve percent. But that was not the real problem,” says Ammann. Even more demanding were transverse tilts of up to nineteen percent and narrow curve radii. That was also the reason for using the PST. At 2.5 metres, all other vehicle variants would have been too narrow, he says. Ammann adds: “That would not have been enough for the high centre of gravity during transport and would have massively increased the risk of tipping over.” That's why the decision was made to opt for the three-metre-wide PST. More stability could thus be achieved. At turn 24, the transports left the high alpine road, which is also appreciated by tourism. What followed was the entrance to the cavern and about 1,000 metres of tunnel ride to the power house. Gradients of up to 15 percent had to be overcome in the process.

The components were then unloaded in the machine cavern using a gantry crane. The transformers were then put onto their foundations by Bau-Trans employees. The voltage transducers were moved into the transformer cavern by means of so-called gripper pulleys on a rail system, laterally, about 60 metres, and then fixed.

With the exception of special transports with unit weights of up to 42 tonnes, the main transport and heavy assembly work was completed in mid-October. Commissioning of the power plant extension is scheduled for 2018. From then onwards, Obervermuntwerk II will significantly contribute to meeting power demands during peak hours, when wind and solar power systems are incapable of producing enough power. For the fact that one always needs to produce the same amount of electricity that is consumed will remain a decisive criterion for the required energy mix. 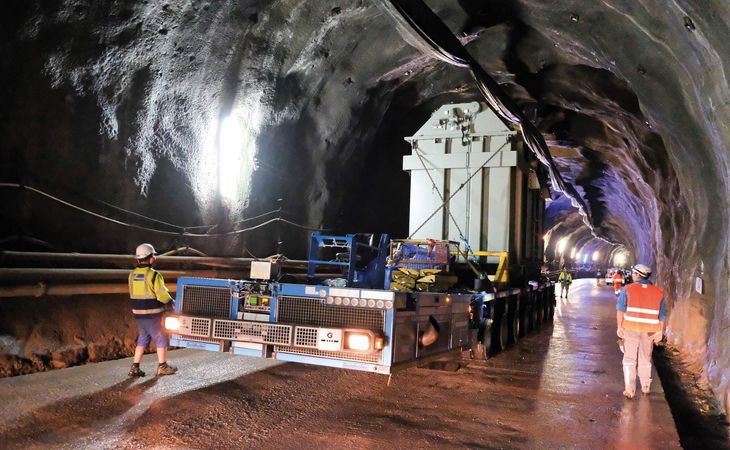 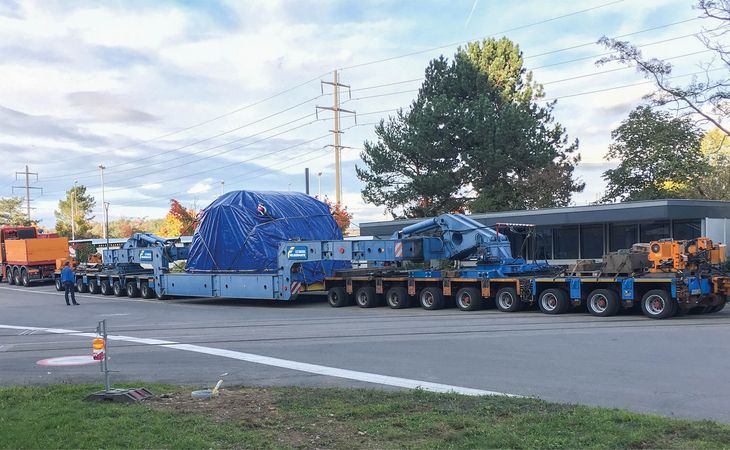 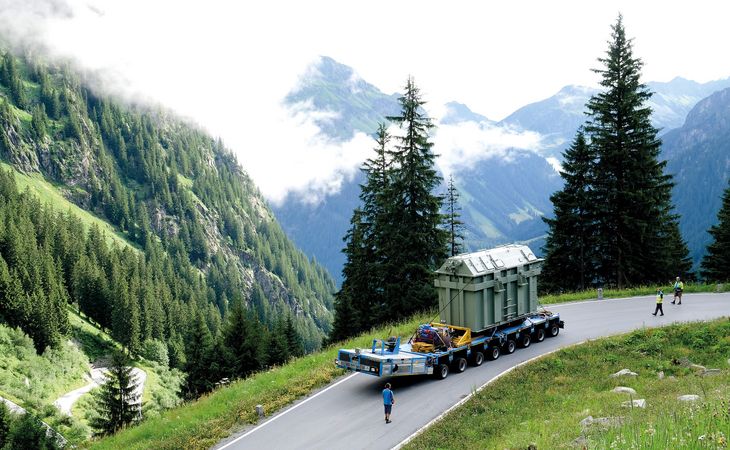 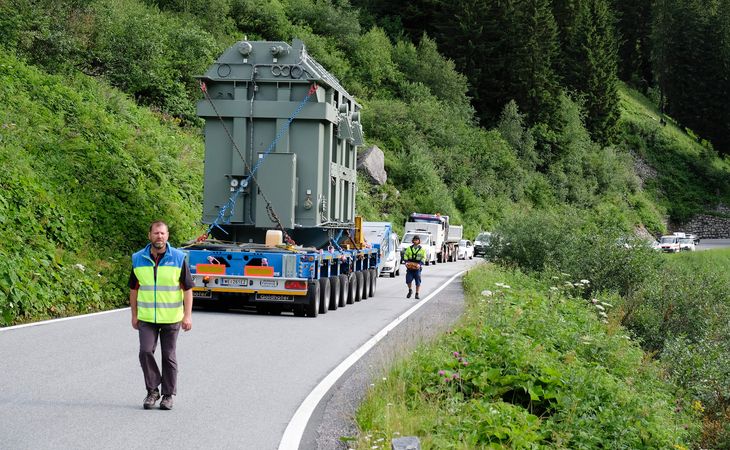 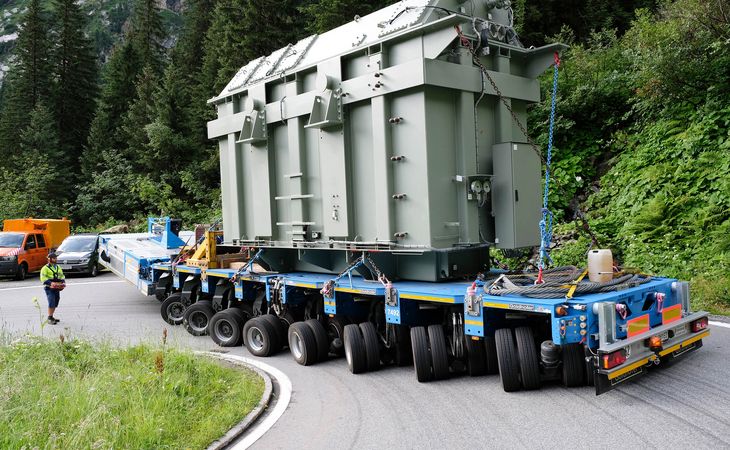 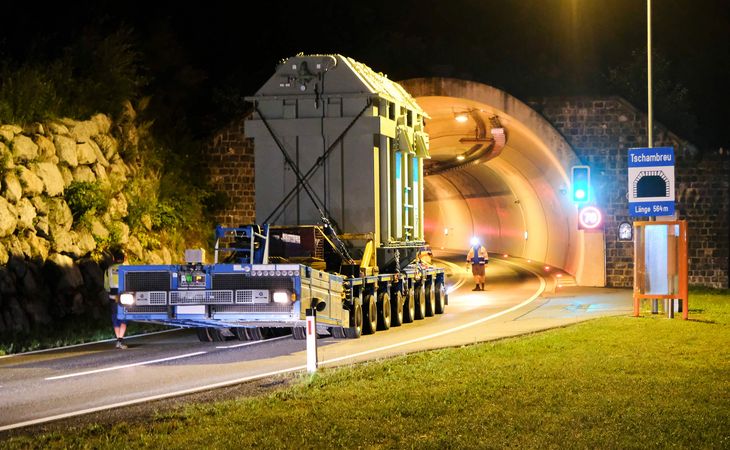 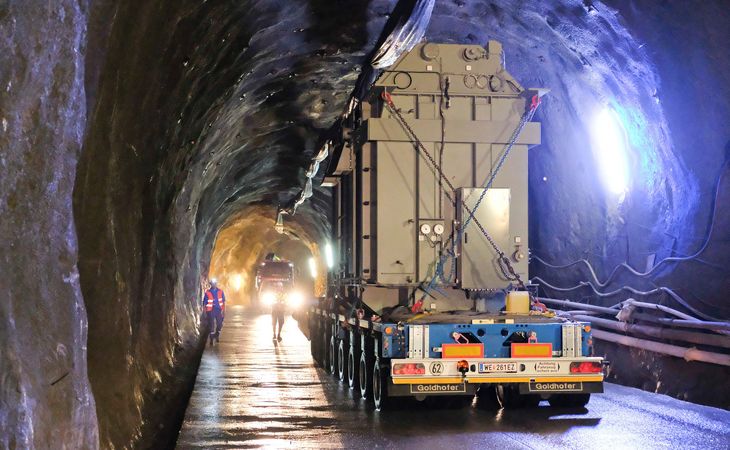 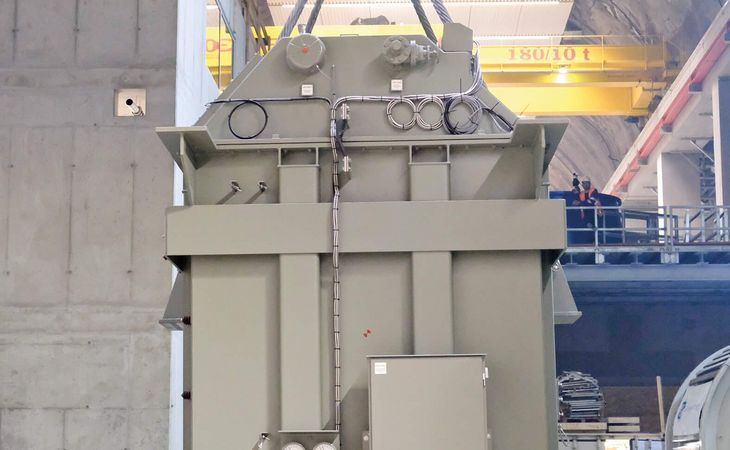 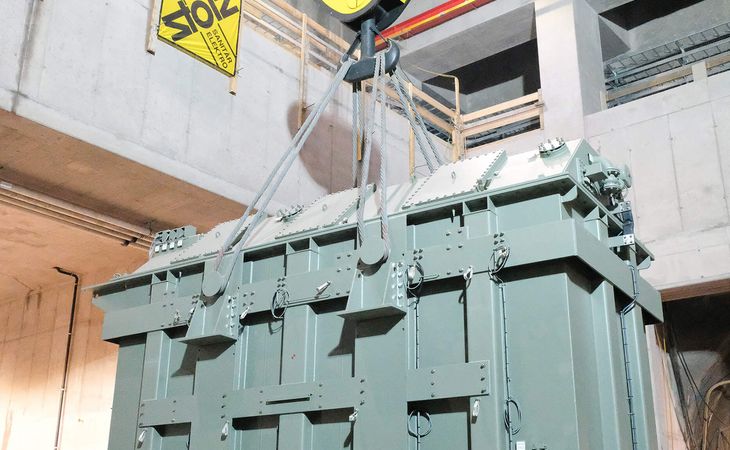