28/02/2019 | More than ten years ago a gas power plant was planned in the eastern Hungarian city of Vásárosnamény. However, it was never erected even although the major components, such as the turbine and stator, had already been delivered. Now the heavy components have been sold to the Middle East. The special transport tasks and craning work were carried out by the Bau-Trans site in Hungary in February.

"Our task was to load the power plant components onto the transport equipment and to transport it to the temporary storage point in Belgrade", recaps branch manager András Czibik from Bau-Trans Budapest. Behind this lay a complex logistics challenge with around 100 special transport tasks on rail, roads and internal waterways as well as numerous craning operations.

The heaviest components were a 196 metric ton turbine and a 148 metric ton stator. "The turbine was located in Lőrinci and was loaded onto a low-loader with hydraulically-driven axle lines and transported to the rail connection, some 200 metres away", explains Czibik, adding that the stator was likewise loaded in Vásárosnamény and transported to the nearby rail platform.

A truck-mounted crane with a 450 metric ton max. payload, was used to transship the turbine to the low-loader rail wagon. "The jib radius required for the lift was around six metres", says Czibik. In order to be able to transship the 196 metric ton turbine safely, the crane was equipped with 134 metric tons of slewing platform ballast. The stator was loaded onto another heavy-goods rail vehicle by means of hydraulic jacks and a skidway. After that was a rail journey to Paks, which lies around 450 kilometres southwest of Vásárosnamény. After arriving there, both components were then transshipped onto a load-loader and tractor unit with the help of a truck-mounted crane. This was used to transport the components a few hundred metres further by road – as far as the quay in Paks. There the heavy goods were transshipped once again onto a barge for transport by water to Belgrade.

"Thanks to their smaller dimensions, we were able to transport 81 further loads directly by road from the starting points of Vásárosnaményand Lőrincito Belgrade, around 500 kilometres to the south. 17 loads were transported via road to the harbour in Budapest, transferred to ship and then transported to Belgrade on the Danube", says Czibik, summing up the enormous scope of the transport project. In addition, there were a further 174 lifts for "normal loads" carried out by the customer themselves and transported to Belgrade. When one thinks that all this was accomplished in just six weeks, Bau-Trans' capability as a project forwarding company becomes very clear. 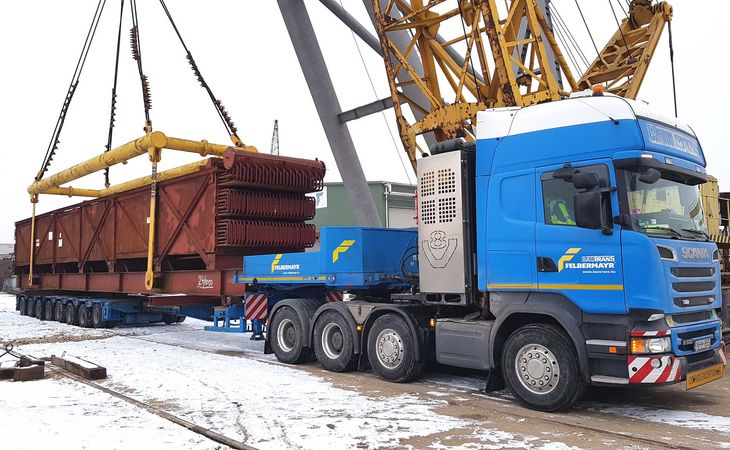 Bau-Trans carried out around 100 special transport operations for a heavy-transport project. 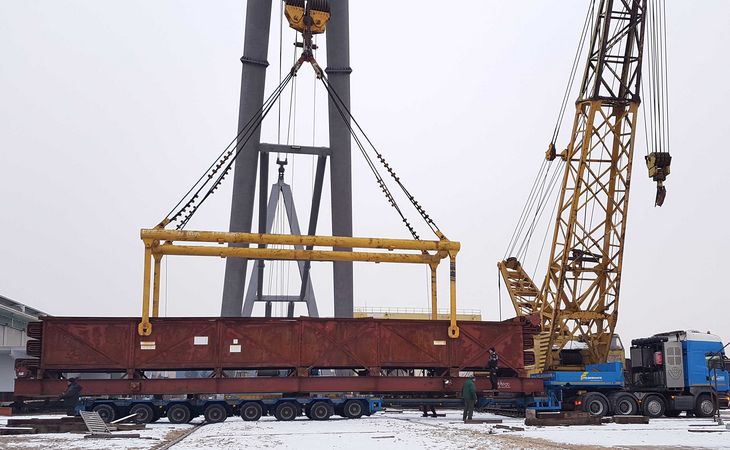 Telescopic heavy-load trailers were used for the road transport of the approx. 70 metric ton high-pressure evaporator. 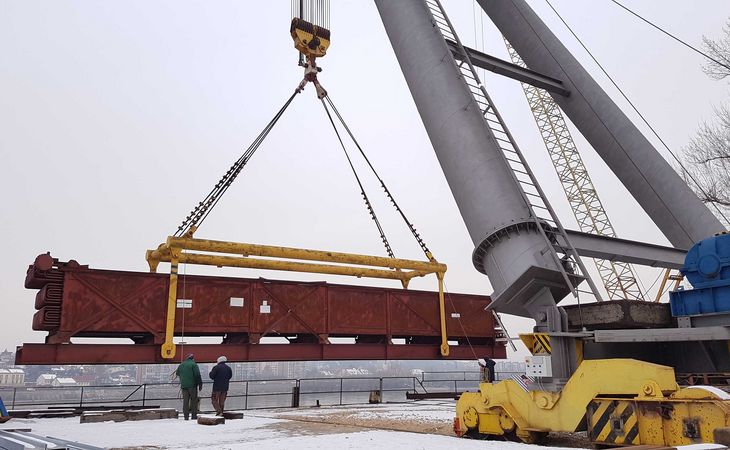 Some of the components were taken by road from Vásárosnamény to Budapest and then transferred to ship for water transport to Belgrade.
PreviousNext